Update from Thursday, 3 December 2020
The videos and resources for these webinars are available here.

It looks like December might bring back some live teaching – and even if full orchestras may not be possible for another while, chamber groups are likely again!

We would like to give you a ‘chamber music tutor boost’ in the form of three webinars between Saturday 28 November and Sunday 29 November via Zoom. Register now.

The courses are free to attend and we would encourage people to attend all three if possible.

You must register in advance in order to take part. 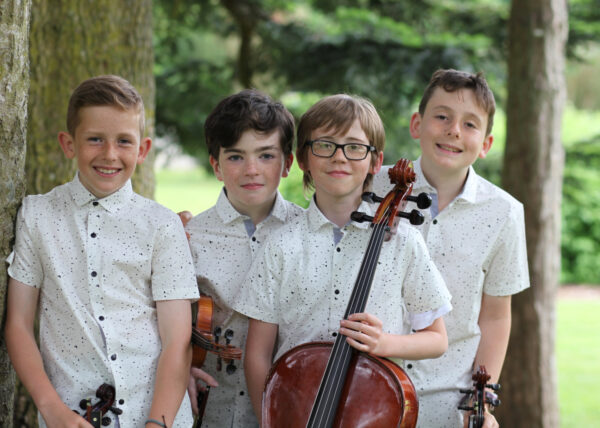 Katharina was born and raised in Lübeck , Germany, where she was surrounded by music at home, at church and in school throughout her childhood and youth. The violin became her main instrument and opened the gates to orchestras and chamber music.

She later studied Violin, Pedagogy/Methodology and Ensemble Conducting at the Royal University College of Music in Stockholm, Sweden where from where she graduated with a MA MusEd in 2002. The same year she moved to Ireland where she started Coole Music & Arts 3 years later.

Katharina also composes chamber and orchestral music (www.katbak.com) and is frequently lecturing within the field of string teaching and chamber music for young players in Ireland and abroad.

She is the violist of OIKOS string quartet (Belgium) and enjoys playing with the Limerick Philharmonics.

Katharine has a starred 1st class honours degree in Music from NUI Maynooth and is a fully qualified Suzuki violin teacher. Katharine started teaching violin and academic music in 1992 and has enjoyed conducting many ensembles and orchestras.

In 2007, Katharine founded the Athenry Youth Orchestra for whom she has composed many pieces including her first orchestra suite which was performed in the National Concert Hall in 2012. She is a three-time recipient of the IAYO National Achievement Award for Youth Orchestra development.

Katharine is a founder/director of the OURchestra residential camp with Coole Music Director Katharine Baker. Katharine is a founding member of the new string orchestra for Galway, Luminosa and in 2017 was appointed deputy leader of the Irish Memory Orchestra with whom she has performed with Martin Hayes and Mairtín O Connor.

She has lectured and performed in Europe and America including presenting on online orchestra delivery IAYO 2020, Edinburgh Suzuki Group 2007-9, Hamburg Music Teachers Conference 2003, Alsace Traditional Festival 2000 and with the trad rock band Tamlin, played support to The Boomtown Rats in Liechtenstein in 1999!