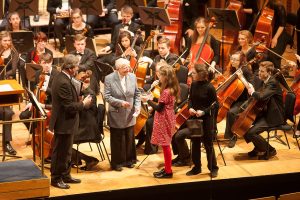 Sister Concepta Murphy was the recipient of this year’s Agnes O’Kane Award at the 20th Festival of Youth Orchestras. The award recognises the vital contribution that volunteers have had in the growth of youth orchestras over the last thirty years.

Sr. Concepta stood out as a gifted musician from a very young age in her home town of Kinsale, County Cork. She graduated from University College Dublin in 1960 with an honours degree in music and musicianship and with a Diploma in Piano Performance from the Royal Irish Academy of Music in the same year.

She took up the position of Music Teacher at the Sacred Heart Secondary School in Ballyshannon, County Donegal – cutting a dash with the pupils when she first arrived in her sports car! – and became synonymous with school choirs, ensembles and feiseanna, above all instilling a great love and appreciation of music in her many pupils. Alongside this she was a founder and lifelong member of the Ballyshannon Musical Society and a popular, sought after accompanist for local musical events.

In 1984 she undertook post-graduate studies in Sacred Music and Liturgy in Notre Dame, Indiana while on a 12 month sabbatical. Upon her return to Ballyshannon, she helped found the Diocese of Raphoe Liturgical Music Committee. Along with a fellow music teacher from Glenties Comprehensive School, Mr Jim Rafferty, they founded the Donegal School of Music in 1985 with a clear Mission Statement – to address the impoverishment of Classical Instrumental Tuition in County Donegal – and put together a voluntary committee of like-minded people to progress this. The biggest challenge they faced was to find suitably qualified instrumental teachers – aside from piano teachers – in the county and Sr. Concepta was clear in her ambition of providing quality classical instrumental tuition in Donegal. Therefore to realise this ambition, it became clear that she and the committee had to look across the border into the Northern Ireland where the tradition of peripatetic instrumental teaching was well established.

Sr. Concepta and Jim Rafferty established the first Donegal Junior Orchestra within a few years of setting up the School of Music linking up with the existing brass band tuition in Glenties. During this first decade, it became apparent to Sr. Concepta that the lack of access to orchestral instruments was hindering the development of instrumental tuition and, in turn, the development of the orchestra. She secured funding from the first Special Support Programme for Peace and Reconciliation in Northern Ireland and the Border Counties to establish Donegal’s first Instrument Bank.

She was involved with IAYO from the very beginning and was elected to the Steering Committee that was charged with setting up an Association of Youth Orchestras in 1994. She attended the steering committee meeting in June and was present at the inaugural AGM of IAYO in Cork School of Music in September 1994. She also persuaded the association to hold their first ever Chamber Music Workshops in Falcarragh in County Donegal. As a result of her involvement, Donegal Junior Orchestra played at the very first IAYO Festival of Youth Orchestras in 1996 and again in the 2000 (Millennium) Festival, renamed as Donegal Youth Orchestra.