We are proud and impressed with how our members and friends have come up with innovative ways to keep their orchestras engaged these past 12 months. It is very important to remember the benefits to young people of playing in an orchestra, even when they are on their own.

After our Peer-Sharing Session on Keeping Orchestras Engaged in February we really saw the depth of ideas that have evolved and wanted to share some of these with our readers.

Ulster Youth Orchestra and their Summer Course, realising that their usual 10-day residential and performance course could not happen, looked at alternative models, including the Benedetti Foundation Sessions & National Youth Orchestra of Great Britain who ran their Easter course virtually. UYO Manager Paula Klein reached out and found those organisations really helpful and generous with their resources. UYO began adapting their ideas to re-create their summer course online via Zoom.

Wishing to retain as many regular aspects as possible, they held sectionals, talks and workshops with the conductors, a selection of masterclasses and one-to-one lessons, and even their usual evening entertainment of quizzes, bingo, and pizza nights!

To allow students a connection to each other, they created small breakout rooms of six people and just let them talk for half an hour. They even had a yoga session!

Artistic staff were prepared in advance and students received lots of resources and recordings.
Besides good broadband being essential, having a dedicated Zoom expert who created guides for all students and staff was a must. 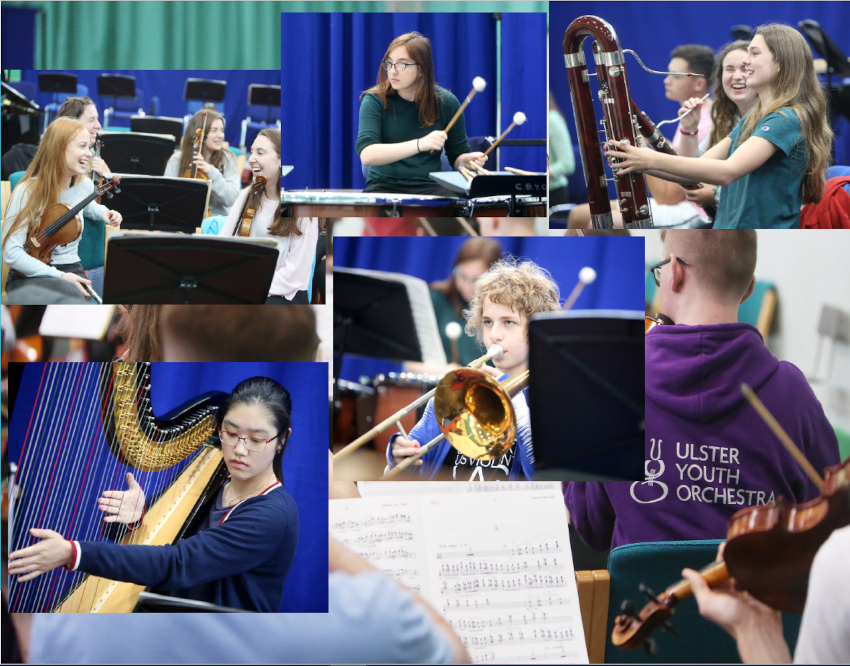 Conducted by Sinead Hayes, the ensemble now meets on Thursdays for one hour. Each session opens with a 5-minute chat where Sinead asks a simple question that everyone can answer, getting all the musicians engaged and interacting. Following this is tuning, then a warm-up which is something that allows Sinead to visually check bow distribution or bow speed. They work on the repertoire and Sinead breaks down each 8-bar section and plays each part on her violin and the musicians play against her, section by section. After a few weeks, Sinead stops leading the sections and gets individual players to lead giving them their own sense of importance within the group. Parts for the score are emailed to the players in advance of the sessions, to have them printed and on their stands.

Sinead also records all the parts herself and uploads practice tracks for the musicians. She layers all the parts so that, in the right ear, the musician can hear their own part with the volume up, and the rest of the ensemble is panned to the left ear. Students get a sense of where they are in the orchestra and can practice to either just their own part, just the rest of the ensemble or both. While this is a huge amount of work for Sinead, she finds it really useful.

Sinead also sets musical goals for the group so that they are still continuing to build on important skills that they would normally learn in orchestra such as critical listening, critical musical thinking and critical music observation. Full details about Sinead’s teaching are on her website, sineadhayes.net.

The Sinfonietta were able to record a beautiful video of Raymond Deane’s Baroque Session with Carolan and Friends and the “Pastorale” from Coreill’s Christmas Concerto just before Christmas. The ensemble was split into two groups of 9, and both video-recorded performing with Sinead conducting. The two recordings were then edited together to create a gorgeous performance video!

Athenry Music School have a policy of using the terms ‘speaker off’ and ‘speaker on’ instead of ‘mute’ and ‘unmute’ which Katharine Mac Mághnuis developed using feedback from her young musicians.

St Agnes’ Community Centre for Music & the Arts has worked tirelessly from the beginning of lockdown to ensure that as many of their musicians as possible were able to remain a part of orchestra. They tried and tested many techniques and technologies to develop their own style of teaching and performing.

They found that people need certainty and things to look forward to throughout the year and it was important to maintain a sense of connection between the players by having rehearsals on an ongoing basis and set performance goals.

They have three orchestras – primary school, secondary school and adult – and host 11 hours of Zoom rehearsals a week. They will always have a skilled volunteer to manage the Zoom calls to deal with any technical difficulties the participants have so the tutor doesn’t have to.

They learned that “simple is best” when it comes to technology – downloading sheet music was difficult for some so they made everything as easy as possible. Getting people used to using headphones and to the technology has made everything easier. People need lots of support to stay engaged so they developed a system of mentors for new players to help with practice and technology. They have beginners who have never played in a group in the real world, just the virtual world.

Nicole Hudson, who tutors with St Agnes’ CCMA and in the primary school, created a series of 30 videos for the primary school (Juniors – 1st class) to replace the pre-instrumental classes they normally would have and the school is repeating these lessons after Easter.

Nicole has also adjusted her teaching style through Zoom. She has learned to pre-empt what the difficult passages of music will be and that she has to be able to see her students properly to see if they’re playing correctly because, in sectionals, groups or tutti, she can’t hear them as they have their microphones off. She also uses a Bluetooth speaker and a metronome during her lessons – she plays with the metronome and it teaches the young musicians how to practice properly, which in face-to-face lessons she normally wouldn’t have the time to do. She has also been able to put more emphasis on bowing technique as she feels that the musicians can learn a lot from watching each other.
St Agnes’ CCMA have enjoyed success with their concerts! Prior to a concert (and guidelines allowing), the repertoire is pre-recorded by their tutors – five professionals for a three-hour recording session in the CCMA building, with a conductor and sound engineer to produce the tracks. During the concerts the tracks are streamed for the audience and the orchestra members, using speaker view on the conductor, perform with their mics off to the pre-recorded tracks.
Dublin Youth Orchestra Concert Orchestra also have a model where some people are present and live in a rehearsal that is streamed to everyone else who can’t be in the room. This is subject to restrictions but it has been successful for their conductor Cormac Ó hAodáin.

You can watch the full video of the workshops from our Peer-Sharing Session on Keeping Orchestras Engaged or download the podcast on iayo.ie and hear more from our contributors. If you would like to add to these ideas, please email us at info@iayo.ie.