When rehearsals came to an abrupt ending last March many music teachers looked for ways in which technology could be used to bridge the gap and create some continuity for students participating in orchestral rehearsals. YouTube was awash with online orchestral performances but taking a closer look at these it became apparent that videos generally consisted of separate renditions of individual parts which had been stitched together to create the illusion of a live online performance. While this is an intriguing idea and a novel workaround to breathe life into creative music-making during a lockdown, it didn’t, however, address the fundamental problem of bringing students together at the same time to rehearse as before even if it was to be at separate locations.

Part of the joy of music-making is that both the performances and rehearsals are live events. Working together in this way can’t be substituted with a virtual experience which lacks this element of immediacy and real-time interaction. I was optimistic however that technology could provide some solution which might enable the relatively ‘simple’ problem of playing together to be overcome, considering we can have a conference call in real-time with someone on the other side of the world without too much difficulty. After all, we would be just rehearsing with someone living down the road or locally.

As many will already know, the problem of latency (the fractional delay between computers) can be a serious obstacle to music-making online. Depending on the computer’s processing power, the internet speed, the connection available to it, and the audio interface being used, latency speeds can vary enormously. Defined as the amount of time it takes for a packet of data to get from the client to the server and back – Round Trip Time (RTT), or the amount of time it takes for the server to receive the first byte of data when the client sends a request – Time to First Byte (TTFB). Software such as Traceroute NG can identify where blocks along this path may exist but addressing these blocks are beyond the scope of most teachers and students.

JamKazam is one of several applications which I looked at to try and help continue rehearsing. Set up primarily for bands jamming together, it provides an interesting virtual space in which participants can join ongoing sessions or schedule their own ones for others to join and play music at the ‘same’ time. It became apparent that despite the feedback the application interface provides in relation to individual and group latency within a jam session, we struggled to get many of the participant’s audio to conform to JamKazam’s configuration setup. When the sessions did work with a handful of players, latency still proved to be too excessive to allow a simple metronome test to convince me that we were all hearing the same thing at the same time. Playing along with the metronome feature within JamKazam was also unconvincing.

A much simpler application; Jamulus passed this metronome test which indicated that the platform had real potential for meaningful online rehearsal. A short YouTube clip (watch here) describes how the system works. This is a much simpler audio-only platform with a more straightforward and minimalist user interface.

Today the keyword Jamulus search returned 18,000 results including Jamulus software page, and the Jamulus discussion forum, and a help page for setting up ASIO4All which will be needed to run Jamulus.

Loading the program and configuring the settings was relatively trouble-free on Mac and a little more complicated on windows because of ASIO drivers which needed to be loaded (help article available here). The non-negotiable constraints however were: 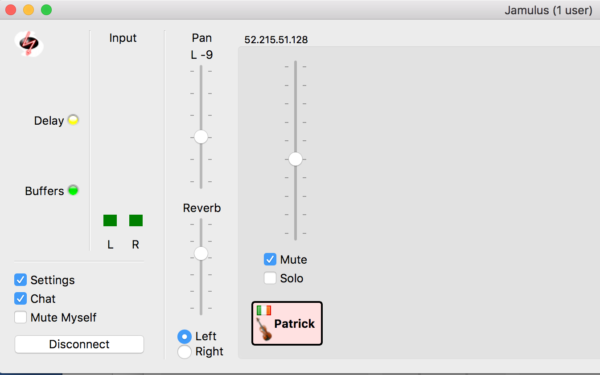 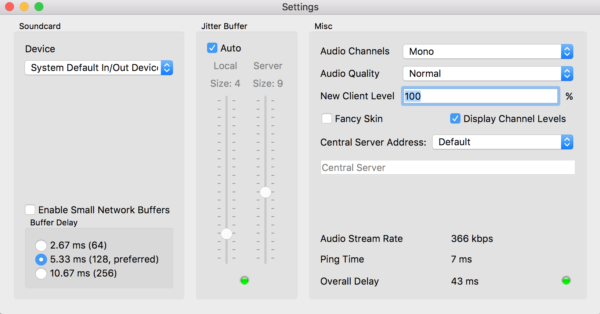 Settings should be configured to ensure overall latency is kept below 50 milliseconds as 10 ms equates to playing more than 1.5 meters away from someone. If you are working with latency between 50 and 100 ms you start to experience echo, the sort you would hear if the rehearsal was taking place in a very large tunnel with players playing 10 or 15 meters away from one another and echoes ringing all around the enclosure. An important fix to minimise this effect is to ensure that the mute button on your fader (not the mute button on the left side of the Jamulus window) is ticked on so that you do not hear the sound of yourself coming back to you, which you don’t need to hear anyway.

You will find that if any of the participants conduct a metronome test by repeatedly counting “1, 2, 3, 4” to the sound of your metronome, this will be perceived to be consistently in time. Remember that you must be able to keep your latency below or at least around 50ms. I would also recommend that participants go to the trouble of sourcing an audio interface and quality microphone attached to the instrument for the benefit of the other participants sound experience, not their own.

You could also conduct a speed test for your internet connection at speedtest.net. When you run this test you are observing three metrics – the ping which should be as low as possible, and the upload speed and download speeds both of which should be as high as possible. This should gauge for you the quality of the internet connection which would ideally be fibre-optic. We managed to run several rehearsal sessions with a handful of students who persevered with the technical challenges but as is the case every year, the summer can prove difficult to run rehearsals with many players going on holiday.

Before we broke for the summer we did get to have several rehearsals with a handful of players which were relatively successful given the varying degrees of tech support available to them. Looking back on these rehearsals which took place on Jamulus during lockdown, my main concern, counter-intuitively, related to the sound quality during rehearsal and not the latency problem itself. This, as I understand it, was caused by the uneven internet quality for some participants and inadequate computer microphones on some of the computers. From time to time, when some participants’ sound including my own, was unworkable and ‘crackly’, the workaround was to simply lower down the fader of the offending sound and protect your ears.

Also, it has to be stated that students need to persevere with the technology challanges to get it to work and learn the music!

When the lockdown was lifted, I suggested that students living nearby get together in quartet pods and begin working from one another’s homes. In order for me to coach these sessions, I have returned to Zoom where the visual feedback is a helpful addition to following the score as I don’t necessarily have to play in real-time to demonstrate a musical line that might have gone wrong when students are working in the same room.

I think there is a future for using Jamulus particularly as a way to overcome restrictions placed on regular rehearsal gatherings and problems associated with traveling long distances. The approach makes it possible to conduct a rehearsal and prepare a program in a meaningful way. Students must firstly share the music they wish to prepare, set up a rehearsal timetable, adhere to the few protocols like Ethernet connection and headphones at least, and conduct a session from a server which is closest to or between all of the players.

We don’t know how the learning environment is going to change in September. I would be happy to team up with other professional musicians and teachers to explore this new environment further, and to look for ways to eliminate glitches in order to establish a working model in which both music students and professionals could benefit from. It will never replace the conventional rehearsal space but it could help to provide a level of continuity in the meantime and explore future-proofing in music learning which has undoubtedly suffered as a result of the crisis. 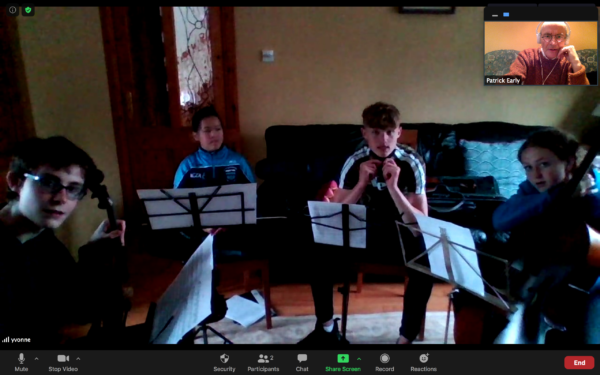 IAYO would like to thank Dr Patrick Early for taking the time to write this article and for sharing his knowledge. If you have any questions for Patrick, you can email him on patrickearly14@gmail.com.