It was tough to arrive at a conclusion as to who would win this year’s two orchestra achievement awards. After deliberating, the judging panel eventually agreed on them, with Donegal Youth Orchestra and Julianstown winning the Orchestra Achievement Award and the Orchestra Development Award respectively.

Before we elaborate on why these two orchestras won, it is important to give an honourable mention to Coole Music for their Sonic Strings programme, which really impressed us and narrowly missed out on first prize.

Although Coole narrowly missed out on the Youth Orchestra Achievement Award, their efforts over the past year are worthy of a special commendation. Coole Music were incredibly proactive in their collaboration with two Swedish orchestras, inviting them to Ireland to partake in their festival. The invitation was returned and Coole Music travelled to Sweden in early February for a tour. We hope it went well for them and are looking forward to hearing what they will do next!

Donegal County Council Cultural Services set a commission in 2011 for a new adaptation of the Oscar Wilde story The Happy Prince in a way that made best use of the creative strengths in Donegal, which include music, storytelling and performance. The resulting work is an exquisite and beautiful piece of music theatre that was specially written to be performed by the Donegal Youth Orchestra and Youth Choir with narration by Little John Nee. The music was composed by Vincent Kennedy. While rehearsals started in late 2011, the bulk of the rehearsal period was during the spring of 2012 up to and including the Easter break. The orchestra had to endure a few stumbling blocks along the way – due to the intensity of the rehearsal schedule, some of their more experienced and older players couldn’t participate as it was interfering with their leaving cert studies. This proved challenging to the remaining musicians as the score was written with those musicians in mind for some of the solo sections. However they rose to the challenge and a wonderful opportunity was created for individual members to shine during these solos that included the clarinet, piccolo and piano. It was an immense achievement and they are worthy winners of this year’s Special Achievement Awards. 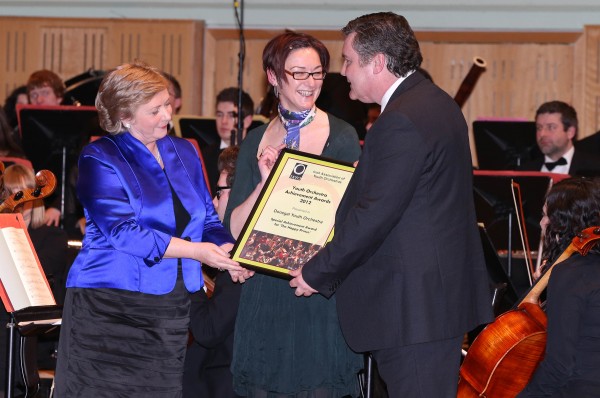 All four aims have been achieved through a period of intense work on behalf of music director Fergus Sheil, the voluntary committee and the professional tutors involved in different aspects of the orchestra’s work.

The orchestra was founded in 2011 with 12 players, a humble beginning. Growth was swift however, and by the end of that year they had 45 players. By the end of 2012, the orchestra had nearly doubled in size again, and now boasts a wide compliment of about 85 players. 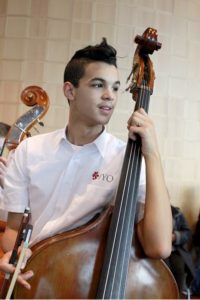 They were lucky to receive a grant from Music Network, and they used this funding wisely. They expanded the range of instruments on offer and these, along with loans from the IAYO instrument bank, allowed them to widen their musical spectrum. As JYO became a more competent ensemble, it no longer became feasible to include complete beginners into the orchestra, and so a sub-section of the orchestra was developed – JYO Juniors, where 22 younger players rehearsed easier repertoire, gaining valuable experience of ensemle playing. They also play with the main orchestra, albeit with a more limited repertoire. The JYO Juniors has grown and developed with the help and enthusiasm of Robin Panter.

More than 50% of the orchestra now take lessons with teachers on Saturday mornings during and after their weekly orchestra rehearsal. The result of all this work has placed the orchestra in a very strong position for development in 2013 – it’s 3rd year. It has a well balanced orchestra (albeit still with some gaps), it has an excellent roster of teachers working directly with the orchestra and strong links to other teachers and sectional tutors. A funding application to Meath Partnership and a strategic alliance with Dublin Youth Orchestra is under discussion to facilitate the introduction of new instruments: oboes, , trombones, keyboards, percussion, as well as the expansion of violas, double basses and French horns. The orchestra has benefitted greatly from Fergus Sheil’s professional contacts and has punched well above its weight in having taken part in events alongside both the RTÉ Concert Orchestra and the RTÉ National Symphony Orchestra with links to players in both groups.