St Agnes’ Strings Across the Oceans

Strings Across the Oceans will take place on ZOOM on Saturday, 21 November at 10am New York, 2pm Berlin/Brussels, 3pm London/Dublin, 10pm in Singapore (www.lsonet.com).

The Late Starters Orchestra Network has gathered musicians from across the world to take part in an international play-together event on Wednesday, 18 November with a performance opportunity on Saturday, 21 November. 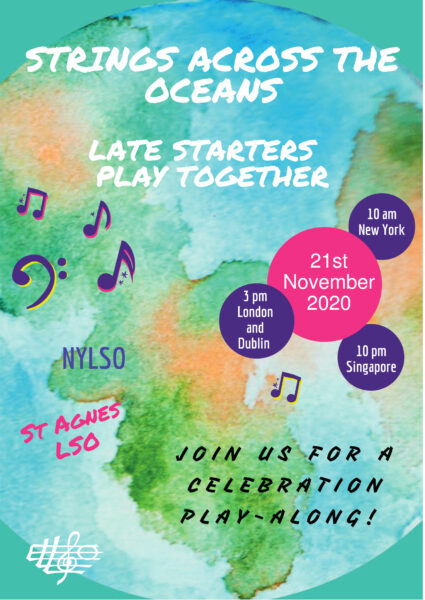 Remarkably 280 musicians have already registered to take part, and will be joined by friends and families who will Zoom in to listen and enjoy the music and the occasion. The musicians will be playing from kitchens, bedrooms and living rooms in their own homes located in cities and countries spread around the globe. A special guest will be composer and conductor, Atso Almila, joining in from Kuopio, Finland.

Strings Across the Oceans, which will take place on ZOOM on Saturday, 21 November on ZOOM using recorded tracks, has provided motivation for weeks of learning and a real sense of bringing people together from many countries in real time through music. Covid-19 in every country has highlighted the role played by music and the arts in helping individuals to cope through difficult months.

The event is made possible with recordings by St Agnes Studio Ensemble created in August in Dublin, under the direction of Seamus Doyle who will conduct live “spotlighted”. The ZOOM event is hosted by St Agnes’ Community Late Starters Orchestra in Dublin. (www.stagnesccma.ie)