The award is made annually to someone who has made a significant contribution to youth orchestras.

Paolo was nominated by Maria Keleman of Young European Strings for his over twenty-years of dedicated volunteer work to the organisation and their orchestras. His constant dedication and hard-work made him an obvious candidate. 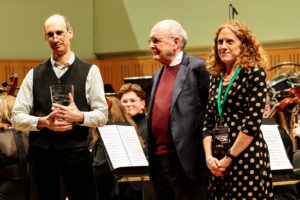 Paolo arrived to Ireland with his then, three-year-old daughter Isobel, over twenty years ago. During these two decades, Paolo single handily organised five foreign tours consisting of concerts and pedagogical demonstrations for local string teachers by members of our Junior, Intermediate and Chamber orchestras across Europe for Young European Strings.

During these tours, Paolo ensured that, during the teaching demonstrations, a local interpreter communicated between player/speakers and the public, and he looked after transportation to and from Ireland for over a 100 members (parents always accompany their children on these foreign tours).

Paolo kept up a year-round detailed correspondence with the directors of the music school’s the groups visited and debriefed each director after our visit.

His voluntary work would have not only kept two full-time secretaries busy through the two decades but would not have been nearly as efficiently executed as he did!

Paolo was present on every Saturday morning during the orchestra rehearsals for 15 years while his daughter Isobel was playing in the orchestras (starting with the Junior orchestra as a three-year-old playing the water whistle in Leopold Mozart’s Toy Symphony). Paolo still acts as voluntary webmaster for the internet presence of Young European Strings Music School long after his daughter Isobel left the school, gained her BMus and doctorate in music abroad.

Paolo Cordone was also a board member and former Chairperson of IAYO.

You can read about previous award winner here.