2020 is a year of many Musical Milestones for IAYO and other youth orchestras and ensembles across the country so we would like to take a little bit of time to write about them!

This year marked IAYO’s 25th Festival of Youth Orchestras. We thought it would be a great opportunity to offer a deep thank you to the many young musicians, board members, staff members, IAYO members, volunteers and participants in the courses, orchestras and festivals we have held over the years, for their tireless dedication to keeping youth orchestras vibrant and relevant in such a rapidly changing world. In 1994 when the idea of IAYO started, text messaging had just come on the market, but DVDs or Google weren’t in sight! 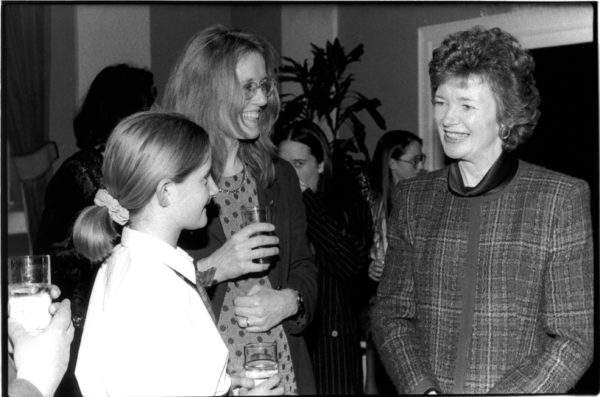 Mary Robinson attending the 1st Festival of Youth Orchestras in 1996

Twenty-four years ago in 1996, the very first Festival of Youth Orchestras took place. The journey began in 1994 at the Dublin Youth Orchestras Summer Concert according to the late Agnes O’Kane – a strong advocate for youth in Ireland. She was approached by Sr Concepta Murphy from Donegal Youth Orchestra with the idea and desire that something be done for young orchestras outside of Dublin. Soon after, Agnes herself relocated to Cork and kept in touch with her old friends from DYO. Joanna Crooks (DYO Administrator at the time) urged her to run with the idea of forming some sort of association. Agnes at first thought it was to be an easy task of simply compiling a list of youth orchestras and interested parties. Dublin Youth Orchestras very generously sent her £200 to cover the start-up expenses, which incidentally they have never asked to be returned and since then, they have been unwavering in their support. The first contacts made to realise the project were with Galway and Donegal. Both Carmel Garrett from Galway Youth Orchestra and Sr Concepta were committed active members. With the help of Andrew Robinson (who had also just moved to Ennis from Dublin to become Director of Maoin Cheoil an Chláir), nearly twenty heads of youth orchestras from around Ireland were invited to attend the inaugural meeting held in the Ennis Maoin Cheoil – IAYO was formed!

That day they made decisions to base IAYO in Cork, to have representatives from each province on the committee, and to seek funding for an instrument bank. They achieved all this in a short space of time.

Over the next few months there was plenty to organise. Conor Ó Ceallacháin from Cork Youth Orchestra, Adrian Petcu of Cork School of Music and conductor of the CSM Symphony Orchestra, came on board and a short while later, Hugh Maguire, who had just received an Honorary Doctorate from UCC was nominated by Agnes to be the IAYO President, as she recognised his enormous contribution to the foundation of the National Youth Orchestra in 1970 and because of his deep interest in all youth music activities. Dr Geoffrey Spratt hosted the first AGM in Cork School of Music and there was a great attendance from across the country and the first committee was elected.

Agnes credited Kay O’Sullivan from City Music College in Cork with providing the most valuable advice and help in the years ahead as she had so much experience in managing organisations. The members’ list grew quickly and there was a lot of information to share. A newsletter was needed and Newnotes was born.

IAYO was fast becoming the national organisation for youth orchestras in Ireland, and needed an event or programme to channel interest and resources. Joanna Crooks suggested a Festival in the National Concert Hall but this of course, would need funding for resources and they were thrilled when the Arts Council funded a grant to buy a photocopier!

Joanna ran the Festival for the first few years. From the start, IAYO was an all-island institution. St Malachy’s College, Belfast played at one of the first Festivals. All these years later, with the continuing support of the Arts Council, the Irish Association of Youth Orchestras is an integral part of a flourishing all Ireland youth orchestra community and it provides resources and activities that are relevant to and well-focused on the needs and development of youth orchestras and young musicians. IAYO’s management experience has enabled them to extend support and provision to specialist areas including chamber music, symphonic wind ensemble and baroque orchestra. IAYO also provides the links from local to regional to national and international links across Europe and the wider world.
It is a non-profit organisation that now has 92 member organisations throughout Ireland and Northern Ireland comprising over 120 youth orchestras and ensembles with a combined participation of more than 5,000 young instrumentalists. 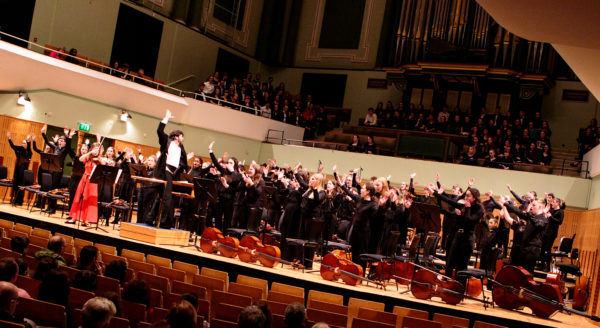 As we celebrated the 25th Festival of Youth Orchestras, huge congratulations are extended to the National Youth Orchestra of Ireland and Carlow College of Music who are enjoying their 50th and 30th Musical Milestones!

Happy 50th – National Youth Orchestra of Ireland
In the summer of 1970, Olive Smith brought together 63 musicians aged 14 – 20 from all parts of Ireland for a residential course at Our Lady’s School, Rathnew, County Wicklow. Hugh Maguire accepted the role of Musical Director and Conductor and the orchestra grew and flourished with members coming from all over Ireland.

The first tour abroad took place in 1974 when the orchestra gave three concerts in Germany. It has since toured across America and Europe.
Dr Hugh Maguire conducted until his retirement in 1990. Following this, Gearóid Grant literally took up the baton and continues to do so today with an astonishing unbroken record of commitment. IAYO were honoured that Dr Hugh Maguire later accepted the role of becoming their first President in 1994.

From 2001 – 2011 President Mary McAleese honoured NYOI as Patron and the current Patron of the Orchestra is Michael D. Higgins, President of Ireland.

“The NYOI is among our most valuable national treasures. Unlike the treasures in museums, though, this asset is constantly changing, constantly growing, constantly improving” – Irish Examiner, Declan Townsend (2005). 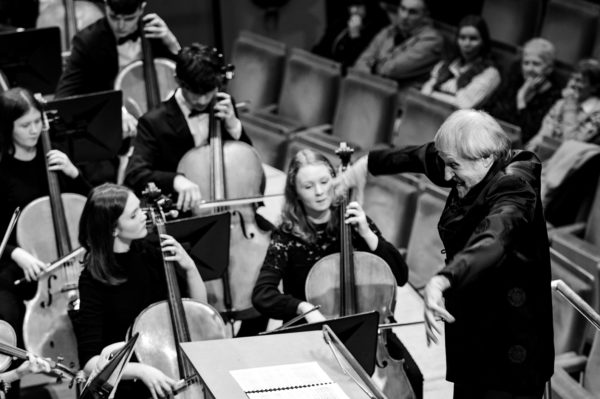 The National Youth Orchestra of Ireland performing at this years Festival, conducted by Gearóid Grant. Photo by John Soffe Photography.

Dr Olive Smith’s work left an enduring legacy on the Irish musical landscape, as you can read in Olive Smith – A Musical Visionary, a newly published book written by Olive’s daughter, Gillian Smith. It is a tribute to her professionalism that the IYO, now NYOI has continued to grow and flourish. Loretta Keating succeeded Dr Smith in 1983 and held this position until 1996. She was succeeded by Joanna Crooks under whom the orchestra developed its highest range of training and performance opportunities. Zoe Keers was General Manager for the period June 2007 – March 2012 and was succeeded by Carol-Ann McKenna who is delighted to be at the helm for their 50th Anniversary!

Happy 30th – Carlow College of Music
In 2015, to celebrate Carlow College of Music’s 25th anniversary, the late Maggie Brady wrote, “Majella asked me if I would like to join her as a piano teacher, as she planned to open a college in September 1990 above her father’s shop. A young woman running a music college in Carlow – a mad idea! Of course, I said yes! There began one of the most satisfying times of my life!’’

There was no difficulty in finding prospective students. Soon they had teachers in piano, violin, guitar, cello, flute, clarinet, and theory and eventually moved into a purpose-built premises in the garden of her new home.

The college provides expert tuition in a wide variety of instruments and music subjects. They now boast two orchestras, a brass ensemble called No Strings Attached, and two choirs, Sing Aloud and Sing!, plus an annual music festival.

Thirty years later, Majella Swan says – “What an amazing journey this has been!”

The late Mícheál Ó Súilleabháin was a special guest at the 25th Anniversary concert and said, “It’s much easier to start things than it is to keep going. This is an example of educational entrepreneurship.” 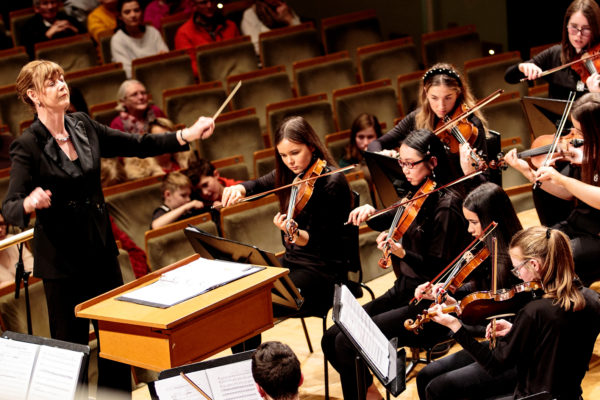 IAYO could not be happier that we all joined with each other to celebrate all these momentous anniversaries and we’d like to take a moment to say “Happy Birthday” to the Irish Chamber Orchestra who are celebrating their 50th anniversary of producing wonderful music.

IAYO wishes to acknowledge that all of its work would be redundant without the participation of all the young musicians themselves! Many thanks to all parents and volunteers – your support is vital and greatly appreciated! Thank you for helping us celebrate 25 years of the Festival of Youth Orchestras!