While everything is a little uncertain and scary at the moment, it was just wonderful to hear some good news coming from County Mayo with the opening of a new music-dedicated facility in Castlebar called MusicWest.

MusicWest, which is made up of Mayo Concert Orchestra, Mayo Youth Orchestra, Castlebar Concert and Marching Band, Castlebar Training Band and the Music West Teaching School, has officially moved into its new headquarters.

We asked MusicWest President, Declan Hynes, to how this wonderful development came about and what work they needed to do to make it happen.

“The acquisition of premises for our groups and stakeholders has been on the agenda of what was then the Castlebar Concert and Marching Band for quite a while, even preceding the founding of both the Mayo Concert and Mayo Youth Orchestras. After both orchestras were set-up, a decision was taken in 1990s/2000s to try and follow through on getting a premises.

We felt this was necessary as we were rehearsing in different venues over the years and latterly in St Patrick’s Boys National School in Castlebar for which we were very thankful. Our organisation was growing rapidly and we had also set-up the musical instruments teaching classes.

Quite a lot of fundraising was going on over the years in tandem with trying to get a place. To do this successfully, we had to set up a limited company with charitable status and this company was called Mayo Academy of Performing Arts (MAPA). This company was mandated to secure a premises. It was structured this way to include all of the county of Mayo and not just localised to one town area as it was felt funding authorities would look more favourably at a county-wide structure, especially as we now had two county orchestras, senior and youth, a county-wide music teaching school, a Concert and Marching Band and a Training Band.

We called this purchase ‘Phase 1’ and it was officially opened in 2014 by the then Taoiseach, and local man, Enda Kenny and Mayo Youth Orchestra provided most of the music that day also.

This left us seeking funding to kit out the building to suit our purpose. Our fundraising efforts were still ongoing – concerts, raffles, church gate collections, flag days, to mention a few. There was so much done and there was a huge amount of fundraising, including some generous donations.

Several bodies were approached with regards to funding to finish premises to our standards – we were effectively now going for a Centre of Excellence! We eventually secured funding from the Leader Programme with South West Mayo Development Company in 2018 and this led us to be able to complete the unit to our requirements.

Our stakeholders, which now also includes the Mayo Male Voice Choir, are absolutely delighted with the premises even though there’s still some work needs doing but it’s most definitely now user friendly!” 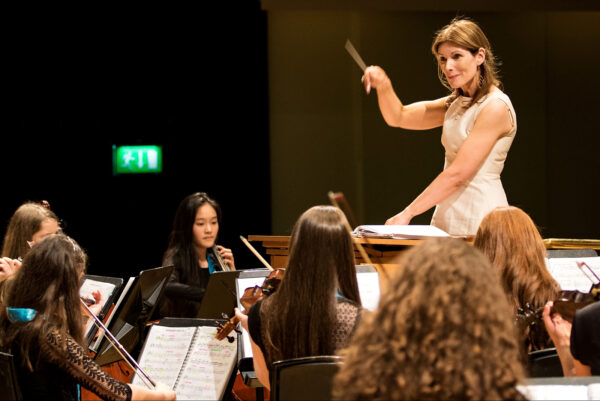 We also asked Mayo Youth Orchestra’s Musical Director Anne Moriarty about how she and the orchestra feel about the new building:

“It’s fantastic to have such a space and, although the timing in one sense is unfortunate as our orchestras and music groups can’t play/perform together, in another sense, it’s perfect timing as we have the space to do socially distanced rehearsals while keeping within the COVID-19 guidelines.”

Mayo Youth Orchestra resumed rehearsals on Saturday, 19 September and have divided up the orchestra into four smaller groups. Anne takes two sessions per week over two weeks so each musician gets to play with their group once a fortnight.

Anne says that “it’s great to be back playing and we’re ever hopeful we can keep going.”

Congratulations to Mayo Youth Orchestra and everyone involved in achieving and creating such a wonderful community resource for music groups, and communities, across County Mayo with MusicWest. We would love to see more dedicated facilities like this, and like that in County Laois and Athenry, in Ireland in the future.