The Youth Orchestra Achievement Awards are presented awards annually to youth orchestras at the Festival of Youth Orchestras. The awards aim to acknowledge the particular accomplishments of IAYO member orchestras which have contributed significantly to the development of these orchestras and to highlight the great work they have done

The 2019 accolades were awarded by the President of the European Orchestra Federation, Jüri-Ruut Kangur. There were three awards this year, the first of which went to Symphonic Waves Youth Orchestra for their Symphonic Schools project. 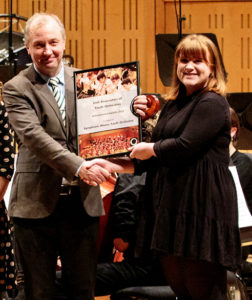 The idea for Symphonic Schools came from Music Generation Galway County following a discussion with Galway 2020 on how funding for the overall Symphonic Waves project could have a further reach beyond that of the orchestra. The objective for the project was two-fold – to recruit brass, wind and percussion sections of the orchestras and to establish a mixed instrumental outreach programme called Symphonic Schools. Auditions for woodwind and brass were held in December 2018 and again in early 2019 with the introduction of video auditions. Through the audition process, enough new players were recruited to create these new sections, bringing the orchestra to symphonic status and thus unlocking a new world of repertoire for the orchestra.

In tandem, Symphonic Schools was developed and is a mixed instrumental ensemble programme for schools, where different tutors with different instruments were placed two primary schools in Galway county. The idea is that the mixed instruments enable ensemble playing within the school but also the opportunity to bring the schools together to form a larger orchestral ensemble with shared repertoire.

These two strands ensure that the overall Symphonic Waves project has a further reach beyond the orchestra members and the ambition is to give access to young people to instruments and tuition, removing any barriers that may exist, and enabling them to progress to musical activities in their local communities, ultimately paving the way for them to, in time, join Symphonic Waves Youth Orchestra should they desire. Together, both strands of this project are creating a viable musical landscape in which Galway’s young people will have access to tuition and ensemble playing across all instruments within the scope of symphonic orchestral music. This will provide a sustainable culture from which Symphonic Waves Youth Orchestra can continue to thrive, grow and benefit from the legacy of Galway 2020 European Capital of Culture.

Symphonic Waves plan to use their award money to bring the participants of the two Symphonic Schools project into Galway to the Symphonic Waves performance at the Baboró Children’s Festival in October. The money will cover their tickets and buses and they will also get to do a fun activity before the performance such as ‘Meet the Orchestra’ and they will attend another exhibition or workshop that is taking place as part of Babaró. It is a wonderful opportunity to have the orchestra and the schools programme together and will be an enjoyable and inspiring day for the young participants (and hopefully future members of Symphonic Waves).