The Irish Association of Youth Orchestras is delighted that Scoil Úna Naofa Violin and Orchestra Project, Crumlin have been the recipients of the prestigious World Music Rights Award from the International Music Council.

The Music Rights Award recognises a programme, or project, that supports, in an exemplary way, the Five Music Rights proclaimed by the IMC. It was presented by Silvina Munich, Repertoires and Creators Relations Director with the International Confederation of Authors and Composers (CISAC) and chair of the jury panel, in Paris at the end of September at the IMC World Forum on Music. 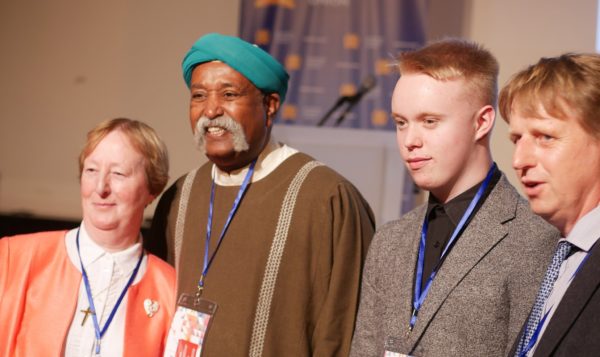 Scoil Úna Naofa Violin and Orchestra Project was nominated by the European Orchestra Federation, a long-time member of the IMC, and selected by a panel of experts chaired by Silvina Munich, who expressed her congratulations to the laureate: “I was familiar with projects at schools in disenfranchised urban and rural areas. Learning to play and listening to music lets children dream of better futures. Music was the social elevator to lift them out to better days. I never heard of a project doing the same for adults (their parents in this case!). Simply playing music together fosters exchange among generations. It is brilliant, and I am very proud to have played a tiny part in this. It involves everyone. Not just the school but the community. Aside from broadening a child’s world, it gives them, without a doubt, an invaluable tool and bright spot for their future. This project demonstrates the transformational power of music and its impact in society. It is perfectly in line with the Five Music Rights proclaimed by IMC.”

In accepting the award, Sr Bernadette Sweeney said that “this is a celebration of all humanity – the right of every human being to have access to music and to enjoy it.”

The forum continued with talks and discussions, including a session on Music Right Number 3 “to have access to musical involvement through participation, listening, creation, and information” curated and presented by IAYO’s Director, Allin Gray. During this session, Arn Chorn-Pond (Cambodia Living Arts & IMC Music Rights Champion) spoke about his past in Cambodia that led him to become an advocate for music for all. After this, Allin interviewed Mary Luehrsen (NAMM Foundation) on her advocacy work on music education and this was followed by a panel discussion, moderated by Sonja Griener (Germany). The panel included Mariam Obange (Kenya), Arthur Gill (Pakistan), Maria Claudia Parias (Colombia) and Carl Jones (St Agnes’ Chamber Orchestra). Carl spoke about the central place of music in his life and the importance of access for all young people regardless of financial circumstances. The session finished with a presentation from Tabu Osusa (Ketebul Music & IMC Music Rights Champion) on the work of Ketebul Music in Kenya and a video message from Evelyn Glennie (IMC Music Rights Champion).

Scoil Úna Naofa Violin and Orchestra Project was initiated at Scoil Úna Naofa (formerly St Agnes’ School Violin & Orchestra Project) in 2006. Before that time, no child in the school learned to play an instrument, or knew any adults who played instruments. Now pupils, and past pupils of the school are given the opportunity to benefit from free instrumental tuition, music theory, and participation in performing ensembles. In less than fifteen years, the initial project has developed into three performing ensembles: Scoil Úna Naofa Orchestra (primary school), St Agnes’ Chamber Orchestra (secondary students, playing string orchestra original scores) and St Agnes’ Parents’ String Orchestra. An intergenerational summer camp brings everyone together for a week of music-making which is a highlight of the year.

Moreover, St Agnes’ Community Centre for Music & the Arts was formed in 2012 and provides a wide range of activities for the community, including a ‘Memory Lane’ choir for dementia patients and their carers.

Over 1,000 children had the opportunity to learn musicianship, to play an instrument, and to play in an ensemble and the programme has extended to the parents of the students and to the entire community, maintaining participation of ex-pupils through to their adulthood and including adults who have never learned music in the late-starter orchestra and in staged musical productions. The wider community has access to many free concerts and activities during the year and to live theatre productions of great classics of musical theatre and pantomime.