Below is the announcement by the International Music Council. Congratulations to everyone involved in the project!

The International Music Council (IMC) is pleased to announce that the 2019 Music Rights Award is given to the Scoil Úna Naofa Violin & Orchestra Project from Dublin, Ireland.

The Music Rights Award recognizes a programme or project that supports in an exemplary way the Five Music Rights proclaimed by the IMC. This year’s edition takes on a special meaning as it is part of the worldwide celebrations of IMC’s 70th anniversary.

Scoil Úna Naofa Violin and Orchestra Project was initiated at Scoil Úna Naofa (Irish for St Agnes’ Primary School) in 2006. Before that time, no child in the school learned to play an instrument or knew any adults who played instruments. Since then, pupils and past pupils of the school have been given the opportunity to benefit from free instrumental tuition, music theory and participation in performing ensembles.

In less than fifteen years, the initial project has developed into three performing ensembles: Scoil Úna Naofa Orchestra (primary school), St Agnes Chamber Orchestra (secondary students, playing string orchestra original scores) and St Agnes Parents’ String Orchestra. An intergenerational summer camp brings everyone together for a week of music-making which is a highlight of the year.

Moreover, St Agnes’ Community Centre for Music & the Arts was formed in 2012 and provides a wide range of activities for the community, including a ‘Memory Lane’ choir for dementia patients and their careers.

Music and performance have brought musicians of all ages to places that they would never have visited, given them confidence, brought them friendship and a strong feeling of their own worth within a team.

Now, not only have over 1,000 children had the opportunity to learn musicianship, to play an instrument and to play in an ensemble, but the programme has extended to the parents of the students and to the entire community, maintaining participation of ex-pupils through to their adulthood and including adults who have never learned music in the late-starter orchestra and in staged musical productions. Everyone is welcome and made welcome: from the smallest child to the most senior beginner. Within families, members of two and sometimes three generations are involved in learning and playing music together.

The wider community has access to many free concerts and activities during the year and to live theatre productions of great classics of musical theatre and pantomime in the heart of their own community.

The IMC Music Rights Award is a symbolic and active recognition of the effort that is brought by each actor involved in the nominated programmes. With this Award, IMC encourages its members and other organisations to give active support to the Five Music Rights: 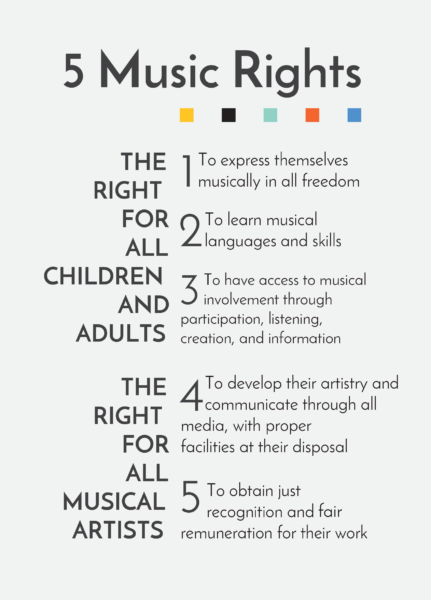 Scoil Úna Naofa Violin and Orchestra Project was nominated by the European Orchestra Federation, a long-time member of the IMC, and selected by a panel of experts chaired by Silvina Munich, Repertoires & Creators Relations Director at CISAC (International Confederation of Societies of Authors and Composers) who expressed her congratulations to the laureate with these words:

“I was familiar with projects at schools in disenfranchised urban and rural areas. Learning to play and listening to music let children dream of better futures. Music was the social elevator to lift them out to better days. I never heard of a project doing the same for adults (their parents in this case!). Simply playing music together fosters exchange among generations. It is brilliant and I am very proud to have played a tiny part in this. It involves everyone. Not just the school but the community. Aside from broadening a child’s world, it gives them, without a doubt, an invaluable tool and bright spot for their future. This project demonstrates the transformational power of music and its impact in society. It is perfectly in line with the Five Music Rights proclaimed by IMC.”

The 2019 Music Rights Award will be presented during a special ceremony in the framework of the 6th IMC World Forum on Music (Paris, 28 September – 1 October 2019).