St Agnes’ Community Centre for Music and the Arts recently celebrated the tenth anniversary of the St Agnes’ Parents Orchestra with an international forum, A Music Right of Way, and performance including musicians from Ireland and six other countries.

The Parents String Orchestra was formed in 2010 by parents and grandparents of children in St Agnes’ Primary School and Scoil Colm Boys National School. The orchestra was initially formed as an informal ensemble for a six-week period in which the participants would have a chance to find out a little more about what their children were experiencing through St Agnes’ School Violin & Orchestra Project. Very quickly it was clear that this experiment was not going to end after six weeks, and the interest was so great that an evening group was set up to include adult players who could not attend on a Tuesday morning. According to the St Agnes’ CCMA website:

“We think of a Late Starter Orchestra as an orchestra where adults of any age may start to learn and to play within an ensemble, who did not have this opportunity, for whatever reason, during their school years. The old belief was that if you didn’t start when you were young, it would be too late. Now the thinking is that it is never too late. We have had and continue to have beginners in their 70s. A Late Starter Orchestra may include returners, people who did learn in school, dropped it for decades, and are now rediscovering the excitement of performing with an orchestra. It may include switchers, sometimes those who have learned piano but never learned an orchestral instrument. An orchestra or a choir brings people together from all walks of life with a common goal, to study, learn to perform and appreciate wonderful music, in a wide variety of forms. The mental health benefits are enormous and are being further explored and researched as we speak, by everyone from mental health practitioners to neurosurgeons across the world.

We are living in a world which needs to change many aspects of how we live our lives. Music is a positive activity, using acoustic materials, requiring little energy, occupying people positively, who now and in the future are working fewer days in a week, or are working from home and need opportunities to be with others. Participation in creative arts in our local communities is at the core of the changes we need to make to make a society with a healthy and sustainable future.” 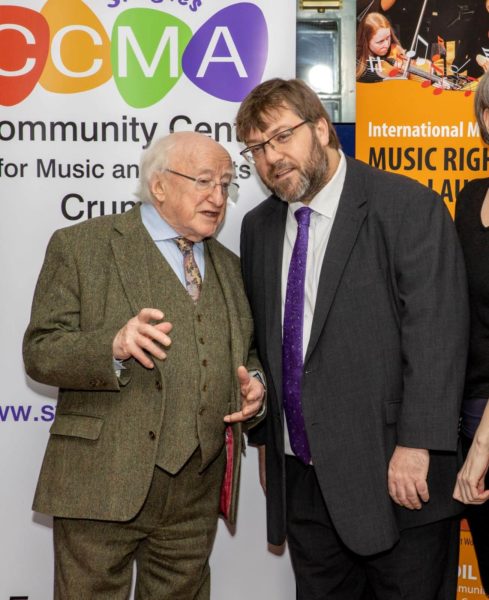 The forum opened with a session on the International Music Council’s Music Rights: Delivering Music Rights 1-3 in the Community Context facilitated by IAYO Director, Allin Gray, focussing on the rights to participation in music for all children and adults. There was discussion on the idea of the rights themselves, how we might deliver them and what the benefits are for music and for society of pursuing a music-for-all approach.
In the second session, Dr Marie-Louise Bowe, Assistant Professor of Music Education in the School of Arts Education and Movement in DCU, led discussions on The particular challenges facing adult beginners – what are the challenges and rewards for adult beginners, and the organisations they join? The focus groups dealt with several aspects that are of particular interest for adult players and learners including: what helps or hinders adult beginners from learning an instrument? What procedures are in place, if any, to access instruments? What role does repertoire play in the success, or lack of, of an adult orchestra? Amongst the interesting things that emerged is that adult amateur orchestral players, like many young players who love playing, are not necessarily interested in attending performances of orchestral music. Listening and taking part are quite different activities.

After a noisy mid-morning coffee break, players from the various orchestras represented – both Irish and international – talked about how their orchestras worked and their experience of taking part. There were, as expected, many different models of running the orchestras. While some had funding, this could prove to have undesirable restrictions. On the other hand, orchestras funded by subscription meant difficulty of access for those who did not have enough money. Amongst the more unusual presentations was one orchestra that never performs in public and a group that focusses entirely on contemporary music including music that is can be re-arranged for various instrumental forces. ( www.coma.org )

The final session of the round-table was chaired by Dawn Davin, an amateur viola player who incidentally took part in the first IAYO Festival of Youth Orchestras with Donegal Youth Orchestra in 1996. The aim of the session was to start a late starter orchestra exchange network where small numbers of players are hosted by receiving orchestras. At the session, there were already offers of hosting from various orchestras represented. You can find out more details about the forum and the network at lsonet.com.
Following the forum, rehearsals began for the 10th-anniversary concert the following day involving almost 200 players including the international visitors. The concert was attended by President Michael D. Higgins and Sabina Higgins who offered their congratulations on the great work done in Crumlin for music and the community in Scoil Úna Naofa and St Agnes’ CCMA. The large string orchestra was joined by the Sounds Ensemble – a late starter concert band based in Dublin – to bring it up to a large symphony orchestra strength and also by the singers of St Agnes’ Musical Society. 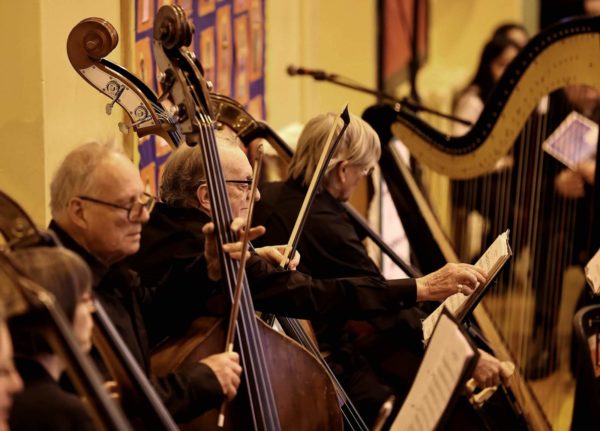 Getting ready to perform for the 10th-anniversary concert.
Photo by Marc O’Sullivan