Saturday, 8 February 2020 saw over 550 young musicians take to the stage of the National Concert Hall for the 25th Festival of Youth Orchestras and what a day it was! Featuring orchestras from across the country and a special IAYO Festival Orchestra, the Festival once again proved what a special occasion it is for Irish young musicians and why this annual celebration has become such a pivotal event in the calendar for youth orchestras.

Eight youth orchestras, with musicians ranging in age from 7 years to 26 years (including someone who flew back from Germany to take part!) performed in this thrilling two-part programme, representing a young, dynamic and vibrant musical community who delighted the audiences and fellow musicians! 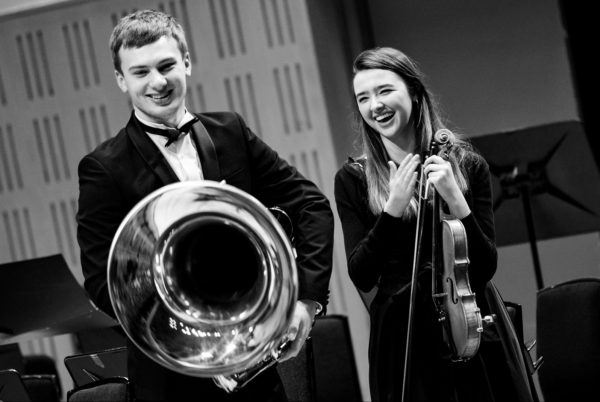 Adam Buttimer and Julieanne Forrest (Leader) from the National Youth Orchestra of Ireland at the Festival. Photo by John Soffe Photography.

This year’s Festival was a showcase of the continually rising standards in youth orchestras around the country and also the diverse range of music they create. The programme included classical works, movie soundtracks, pop tunes recreated for orchestra and a huge amount of music by living Irish composers such as Katharina Baker, Vincent Kennedy, Sam Perkin, Ronan Hardiman, and Declan Townsend, many of whom were in the audience! We had a mix of musicians from all over the country. At the 3pm concert we had Dublin Youth Orchestras Junior Strings, Carlow Youth Orchestra, Athlone Youth Orchestra and the National Youth Orchestra of Ireland. The 8pm concert was opened by the IAYO Festival Orchestra followed by Young Dublin Symphonia, Symphonic Waves Youth Orchestra from the West of Ireland, and UCD Symphony Orchestra. As this was the 25th Festival, it was to be a celebration! To mark this occasion, for only the second time, the IAYO Festival Orchestra was formed and featured almost 80 musicians from 25 different IAYO member orchestras performing under the baton of conductor Tom Crowley.

There were other musical milestones on the day – the National Youth Orchestra of Ireland is celebrating 50 years in 2020 and Carlow College of Music, whose youth orchestra Carlow Youth Orchestra performed, are also turning 30 this year. You can read more about the Musical Milestones of 2020 here.

We want to extend our thanks to all who were involved and volunteered in the build-up and running of the Festival. It is with this combined effort that the Festival was once again such a huge success. Congratulations to everyone who performed on the day. It was spectacular and we look forward to doing it all again next year on Saturday, 13 February 2021 for the 26th Festival of Youth Orchestras!